Ray Cross finds out what makes the Main Man tick…

I find myself in the unassuming village of Chelsfield, in Kent. A handful of shiny new Herald motorbikes are sitting out front of the workshop. Inside, I’m greeted with the delightful view of customs bikes in progress, and magnificent finished builds. Some bikes are almost unrecognisable due to the sheer amount of work and modification that’s been put into them.

John Rooster is the man behind this set up. The flames of his enthusiasm, already lit from being around motorbikes from an early age, were fanned when at the age of 11 his father bought him a Suzuki trail bike. His first riding experiences came courtesy of a man called David Taylor (he wheelied round the TT course) who owned a club in Dartford near Bluewater quarry where John used to go on a Sunday with others to learn the basics of riding. John remarks that the smell and noise from the two-strokes scared him, but there was something about it that “gets you going”, definitely something we can all relate to there. 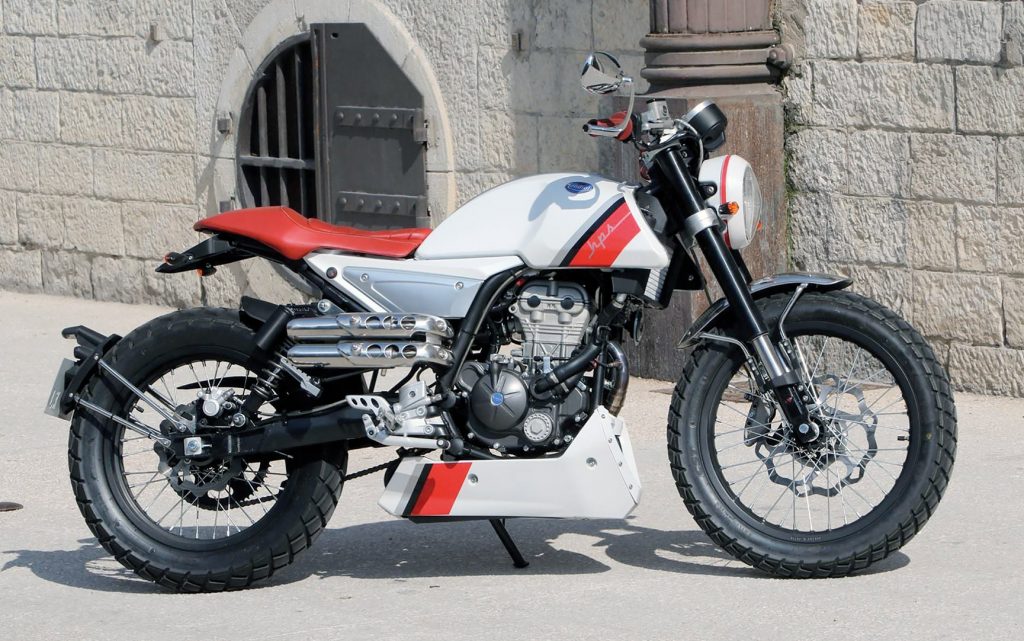 He had modest beginnings in the garage. Snapping bolts on the headstock and generally causing the shenanigans you’d expect an 11-year-old mechanic to. John remarks that he grew up in the best era of biking, the days where you could walk around the paddocks at Brands Hatch and meet your heroes. For him that was Barry Sheene, and jumping to the other end of the spectrum, Eddie Kidd.

The need for the fix and the buzz

Two-wheeled sport like moto x and road racing, particularly the TT were those he wanted to emulate. But he didn’t have the money, he wanted the fix and the buzz. John would buy things no one else wanted. There was a breakers yard in Greenwich that proved to be fruitful, bartering for unwanted and non-running stock he could pick up for £30- £40 that may have had a V5. After buying a Zed 250 frame and using the remains of a friend’s crashed Suzuki GSXR 750 John set about making a frame to fit the 750 lump. Through hard work and a fair amount of elbow grease he built a frame, and turned the “Kawazuki” into a hybrid drag bike. 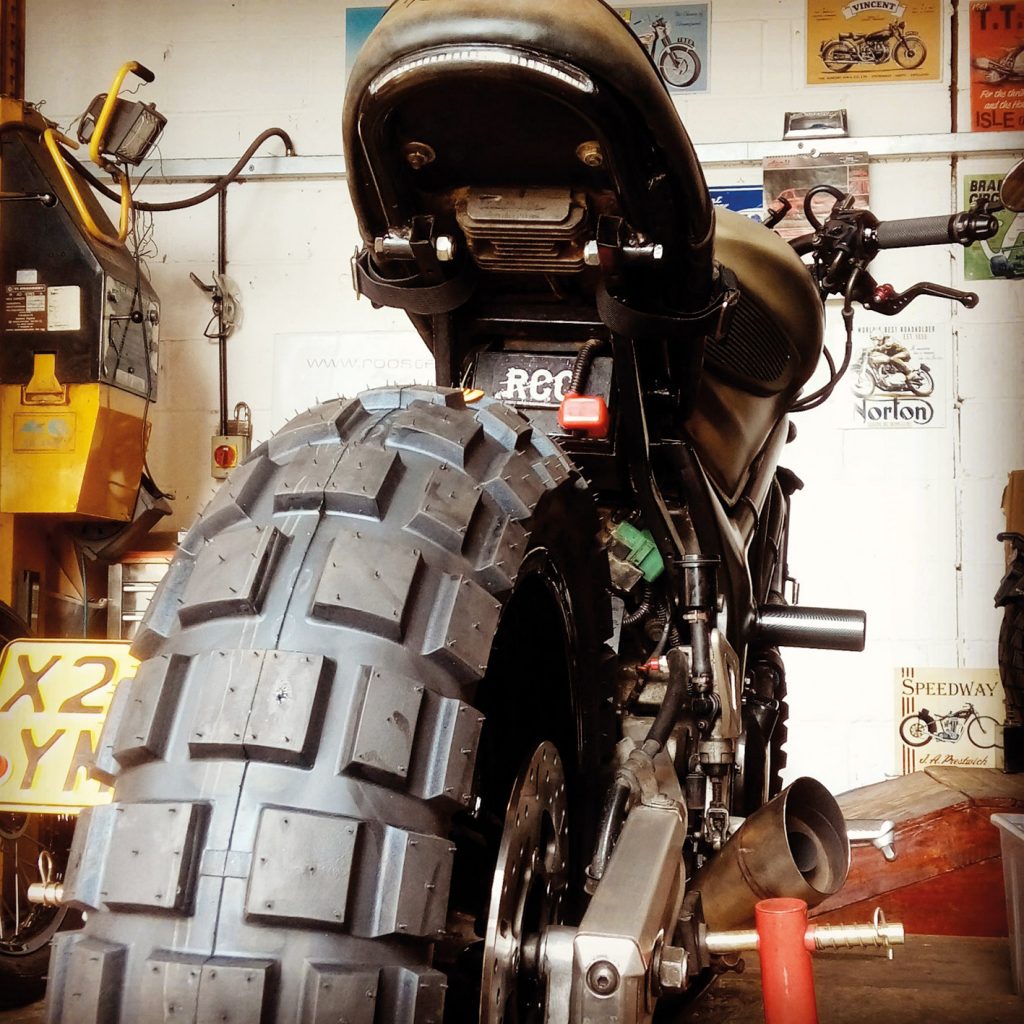 Bike stuff was all he wanted to do, he’d get a few beers in, the tunes on and build bikes. Getting a coffee with mates up on Blackheath on a freshly built machine with oil and petrol pouring out the sides! Though his mates wanted him to build bikes for them, he wasn’t doing it professionally, yet. He did have what he called “proper jobs” but he didn’t like them, being unhappy working lots of other hours for other people. He was only able to do what he really loved on evenings and weekends. That was until his partner fell pregnant.

Not wanting to be one of those dads that came back from work and was unhappy everyday, he took a gamble. He scraped every penny he could muster and started his business building bikes for other people. The defining moment came when he went to the NEC in Birmingham. It was here he came across Herald. Not having heard of them, he admits he had lost touch with the British bike scene.

He was drawn by the look of Herald bikes and thought they looked really cool with their metal tanks and twin shocks. Like they had come out of the ’50s with the imagery and style, and only cost a few grand! The gents at the Herald stand were really chatty and passionate about the company; they weren’t just salesmen, says John. He picked up some literature after chatting and walked away. It was on the drive back from Birmingham that he was really pondering the idea of working with the brand. Thinking along the lines of becoming a distributor for them, perhaps customising them, adding his own personal touch and selling them. Within a month of returning from the show, he had a Herald rep visit him and had numerous phone calls to discuss the business proposition. Herald at the time were trying to offer a programme of getting custom builds direct from them.

Mutt, who were part of Herald, suggested taking some bikes and customising them, with people paying a bit more. This idea really took off. With the integration of an excellent marketing department, actor Tom Hardy and newspaper spread, Mutt became a highly sought-after brand. Herald, smartly using Mutt’s success as a guideline, took John up on his offer. He was going to be the South East’s only distributor, customiser and service agent. Their current range comprises of Honda based 125-500cc engines in café racer or off-road styles.

Happily, both Herald and John’s business have grown in the last 2-3 years. There were certain things clients liked and didn’t like about the standard bikes and John was able to change it all. Anything from different tanks, to colours and speedos. He has an excellent relationship with Herald, with them trusting him enough to offer a two-year warranty on his custom builds.

It’s John’s passion, he doesn’t care that it’s cold and that sometimes it’s wet and he’s out in the rain. He’d rather be welding or hammering a bit of metal at 8 at night while everyone else is watching TV.

When it comes to customisation, John isn’t picky about what he’s doing. He’s obsessed with wheels and engines. Whether it be a scooter from the ’80s or a full blown super naked, his preferred type of bike is the Mad Max style; it’s what he chooses to go out on if he goes out on any rides. He’s currently building a little chopper style bike for his son, with a 50cc engine. His two-year-old, who’s not long been walking, is going to be the envy of his nursery. It’s John’s passion, he doesn’t care that it’s cold and that sometimes it’s wet and he’s out in the rain. He’d rather be welding or hammering a bit of metal at 8 at night while everyone else is watching TV.

It can be a love-hate relationship of course. He explains that wiring is a nightmare, Triumphs especially. “Modern day electronics on bikes are so hard to get around. When people want the ignition moved or speedo changed from a modern Triumph, the bike won’t start”.

John is a qualified sparky by trade but he jests that he’d rather wire up a whole factory than try and find an earthing problem on a bike. His rule of thumb is if it’s still got carburettors and hasn’t got an inbuilt chip in the key, it’s going to be alright.

His future aspirations revolve around the establishment of a “one-stop shop” for bikers, incorporating a barbers, a bar, a coffee shop, a tattooist and in-house mechanics. And, of course, vehicles; everything from hot rods to classics, and café racers to sports bikes. The search is already on for a suitable premises.

The future of John Rooster Customs is a bright one. I strongly recommend checking out his work if you haven’t done so already. I’d like to say thanks for his hospitality and time.

How long can a motorcycle injury claim take?