Excuse me pioneering lady riders, may we have a word?

Female riders, motorcyclists, bikers. From your everyday lady rider to celebrities such as Michelle Rodriguez, Tricia Helfer, Pink and Ann Margret; they have all shown that the lure of two wheels is both universal and irresistible. Helen Mallamdale updates on some past history and current exploits of lady riders…

But how many other female riders out there are you actually aware of, especially those not in mainstream media, who have contributed to the overall face of female motorcycling and promoting our position within the lifestyle that we love?  Many are unknown to the average joe on the street, but those in the know are in awe of figures in the racing, adventure, motocross and stunt riding worlds. 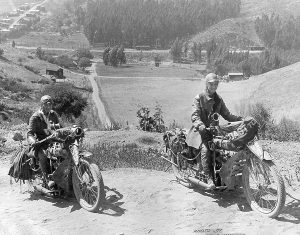 Some of the pioneers of female riding were individuals such as Augusta and Adeline Van Buren.  These two sisters, on their own motorcycles, each rode 5,500 miles in 60 days to cross the continental United States. They completed the trip on 8th September 1916.  Achieving this enabled them to become the 2nd and 3rd women to ride motorcycles across the entire continent, following Effie Hotchkiss. 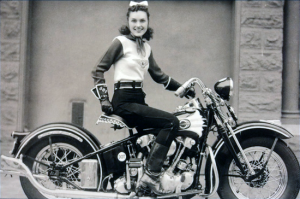 Then there was Dorothy “Dot” Robinson, who in 1941 helped form the Motor Maids, an organisation for women who simply enjoyed motorcycling.

As mentioned above, another such pioneer was Effie Hotchkiss. Effie was a Wall Street banking clerk with big dreams to see America. So in 1915, using money left to her after her father’s death, Effie bought a Harley and, according to the archives of Harley-Davidson, rigged the V-Twin with a sidecar for her mother, Avis, who insisted on going along.  They left Brooklyn in May and took two months to complete a journey of over 5,000 miles surviving sweltering heat, blown tyres, uncertain weather and an unpredictable terrain with muddy, dangerous roads. However, after reaching the Pacific they decided to turn around and head back to New York. On the return trip, they logged another 4,000 miles on the odometer before arriving home in October. 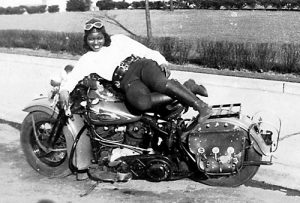 During the 1930’s & 1940’s, Bessie Stringfield, alongside rising levels of bigotry, sexism and most importantly, racism, took it upon herself to travel solo and went down in history as not only the first female to travel across America, but also the first African-American lady to achieve it. She had been riding motorcycles for just three years, her first motorcycle being a 1928 Indian Scout.  She carried out eight solo, long distance rides to 48 states over the following decades.  She served as a civilian motorcycle courier for the U.S. military during the second World War and, after the war, moved to Miami, founding the Iron Horse MC. She made regular appearances on the local motorcycle show circuit, earning herself the nickname “Motorcycle Queen of Miami”.

She owned 27 Harleys in her lifetime.  In 1990, when the AMA opened the motorcycle heritage museum, Bessie was included in the inaugural exhibit on women in motorcycling.  Recognising her as one of the “Heroes of Harley-Davidson”, not only acknowledged her efforts in a lifetime of breaking down colour barriers for others, but for advancing the joy of motorcycle riding for women.  Bessie died in 1993 aged 82 and in 2002, she was inducted into the AMA Motorcycle Hall of Fame. The legacy of Bessie and the other ladies in that era paved the way for female motorcyclists to do what they love today, regardless of views and current trends. 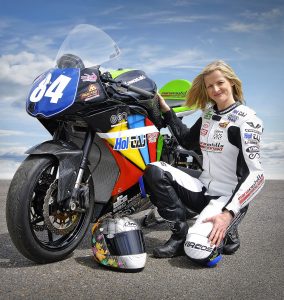 Another one of these ladies is Maria Costello MBE.  She is a pretty special individual; not only is she the only female racer with those three letters after her name, she is the holder of the Isle of Man lap record for a female rider and the first female to stand on the famous TT podium.  She is in demand for mentoring young riders and is part of the FIM Women in Motorcycling Commission; also running her own women only track days within the UK. 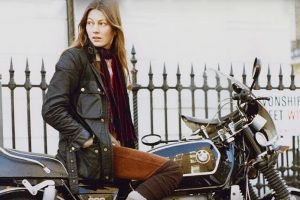 Elspeth Beard is an award-winning architect and motorcyclist.  She is believed to be the first English woman to ride solo around the world, completing her trip in the early 1980’s.  She owns a collection of motorcycles that she still currently rides, which includes the faithful BMW R60/6 that carried her across the world. 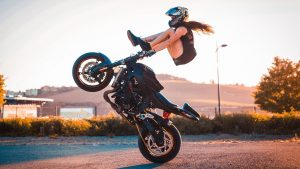 Then there is the stunt rider Sarah “Madame Freestyler” Lezito, an amazingly talented 24 year old from France, considered to be the best female stunt rider in the world.  She started out at 13 riding her father’s quads around the vineyards; buying her own little 125 at 16.  As the years progressed so did the talent; she had hoped to continue in her father’s footsteps at the vineyard, but the lure of stunt job offers was too inviting to refuse.  Because of her amazing prowess on two wheels she is constantly in demand and always on the lookout for new challenges. She showed off her incredible skills as the stunt rider double for Scarlett Johansson in the movie ‘Avengers 2’ and left many men behind her in the Stunt Grand Prix riding the G 310R. She is now part of the BMW Motorrad and has 2.5 million followers on Facebook.

Laia Sanz is a Spanish trial and Enduro superstar who has dominated the Dakar rally since her very first attempt in 2011; switching from trails to enduro in 2010. In terms of female championships, Sanz has won it all; the Women’s World Trial Championship 13 times, the European Championship 10 times.  In her first year she topped the female motorcycle class that she repeated in 2012 and 2013.  In 2015, Sanz achieved her best finish, coming 9th overall.

Beryl Swain may not be very well known to many bikers, but her name is one firmly stamped in the history books.  In 1962, Swain became the first solo woman rider to compete in the Isle of Man TT when she took on the mountain course riding a 50cc Itom Racer; a bike that was highly tuned by herself and her husband, Eddie, who was also an accomplished motorcycle rider. She finished 22nd in a field of 25 in the Ultra Lightweight class.  However, motorcycling’s governing body unfortunately declared the TT too dangerous for solo women; ultimately pulling the plug on female entrants.  At the end of the race a reporter spoke to her – she said: “my hands were frozen around the twist grip, but I was told I managed to get within three seconds of the lap record for the 50cc class”.

Claire Lomas, MBE is a British campaigner, fundraiser and former event rider from Leicestershire. In 2007, Claire suffered broken ribs, a punctured lung, a broken neck, a broken back and a spinal cord injury after a horse-riding accident, which left her paralysed. Before 2007, Claire produced and competed horses near Melton Mowbray, then in 2012, she finished the 32nd Virgin London Marathon in 17 days using the ReWalk robotic suit.

The bike has hand control gears, Velcro on my knees to stop them flapping and toe clips to stop my feet sliding. I have someone launch me and then some poor person has to trust me as I ride towards them as they catch me!”  – Claire Lomas

She was then given the unique opportunity to ride a lap of the circuits in the Bennetts British Superbike Championships before thousands of Superbike fans; first she was interviewed and then lifted onto the bike before completing the lap.

I never thought when I first passed my bike test back in the mid 1980s, about the amount of inspirational and female motorcyclists before me, not to mention the very brave and determined ladies in this present time, that have shaped, and are helping to shape, our future on two wheels in a world that was previously heavily dominated by men.  Thankfully, we have found our own voice and are paving the way for the younger female generation to aspire to, or even just simply, admire.  We need the next generation to have the passion as we do and to make sure it continues in the way we all know and love.

So, my lovely, fellow female riders – who is your favourite, your inspiration, who do you admire? Apart from yourself, of course.

Weise on a mission with AA-rated jacket

The Life Changing Magic of Sheds

Learn to ride enduro with Freestyle

How to prepare a motorcycle for an...